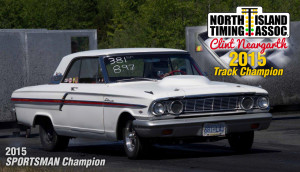 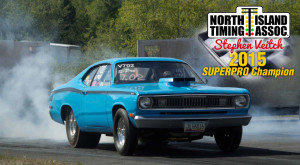 Countdown to the Track Champion for 2015:

Clint Neargarth and Chris Sharpe were tied 356 points each at the end of the 2015 race season. We then go to the tie breakers, they each had a 2 wins and 81 points… and they were still tied. Clint had a runner up with 71 pts, Chris had a semi’s finish of 61 pts.

Clint Neargarth is declared the Overall Track Champion for 2015!

If Chris had just went one more round in the semi’s to be runner up then we go to a 3rd tie breaker and Chris would have been the overall track champ because he had 2 quarters 51 pts vs Clint’s one 51 pts, Chris lost that lead ironically on his final race on the last day of the year.

It was quite a season with 94 race cars on the August weekend, our highest count yet.

Thanx to all the volunteers, sponsors and racers who made this past year a success.

GRACE period for registering for the points championship is you must pay before the next race. To retain the points you have earned this past weekend we must receive payment within the next 30 days (before July 18/2015). Thanks to those that have already done so, you’ve made our job a lot easier.

We have 3 weekends of racing, all double headers, meaning eliminations Saturday and Sunday. Points are accumulated in this fashion. 15 pts for passing tech if your car is unable to make a complete run throughout the weekend. 30 points for staging for 1st round + 10 points for every round you stage for, until that days eliminations are over. Plus 1 bonus point for every elimination you enter. Thus, if you race Saturday and win 1st round but lose 2nd round you will have 41 pts. Then Sunday you lose 1st round, you have 31 pts. So for that weekend you have 72 points total towards the point championship. Tie breakers at the end of the year will be determined by winner, runner up, semi final, and 1/4 final finishes. Hence, if you are tied for points at years end and one finalist has 2 wins and the other has 1 win and 1 runner up. The one with 2 wins is the points champion. Points are NOT transferable between classes. You MUST register before second race to have your points counted and the full fee will be put towards the points fund for your class that you participate in.